This site has been a long time coming for me. It’s something that I’ve been considering doing for a long time, but for one reason or another I’ve never gotten around to it. Life gets in the way, excuses are made, and things fall to the wayside. I’ve even been asked on several occasions “when are you starting a food blog?” and I’ve always replied with a negative answer because I’ve never had the confidence in my own abilities to think I’d be able to advise people on how to cook or bake.

But sometimes you have to take a plunge and do things that you wouldn’t ever see yourself doing. When I left home for the first time 12 years ago, I would never have seen myself becoming a competent cook/baker. I barely knew how to make a stir-fry when I left home, and I never really had to know because my Mum is such a fantastic cook and she always had dinner ready when I got home from school or work. But once I’d left home and had to fend for myself, over the years I tried more and more ambitious recipes and cooked almost every day for pretty much ten years straight, so I did gain a little bit of knowledge. I even applied for last year’s Great British Bake Off and while I, obviously, didn’t get on the show, I did manage to score a telephone interview with the producers and was told I did well to get that far, so clearly there must be something there.

So I’ve decided to, finally, start putting down the recipes I’ve learned over the years onto paper. Well, virtual paper, anyway. Some of them are tried-and-tested recipes that have probably been used by every chef or baker the world over, and some are my own personal twists on well-known recipes. As well as recipes, I’ll likely end up talking about foodie things that interest me and as well as documenting my successes, I’ll probably document my failures as well. Because you can’t improve without making some mistakes first.

And that’s one of the things I’ve learned over the years. That it’s okay to make mistakes. So if you’ve ever put off trying to learn to cook or bake through the fear it may go horribly wrong, stop it. Chances are it will go horribly wrong on the first attempt, or maybe even the second attempt, and perhaps even the third. But eventually, it will all click and you’ll think “Huh. That wasn’t so bad”. Because I firmly believe that anyone can learn to cook, because I’m proof of it.

February 28, 2017 By bigfriendlygrub
How to make... Sourdough Starter 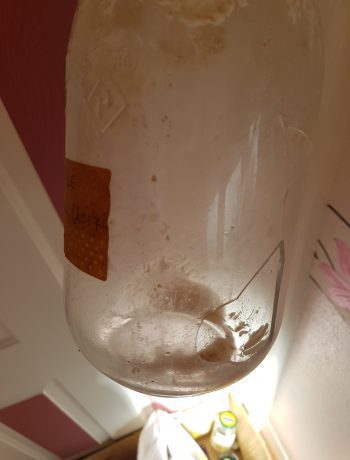