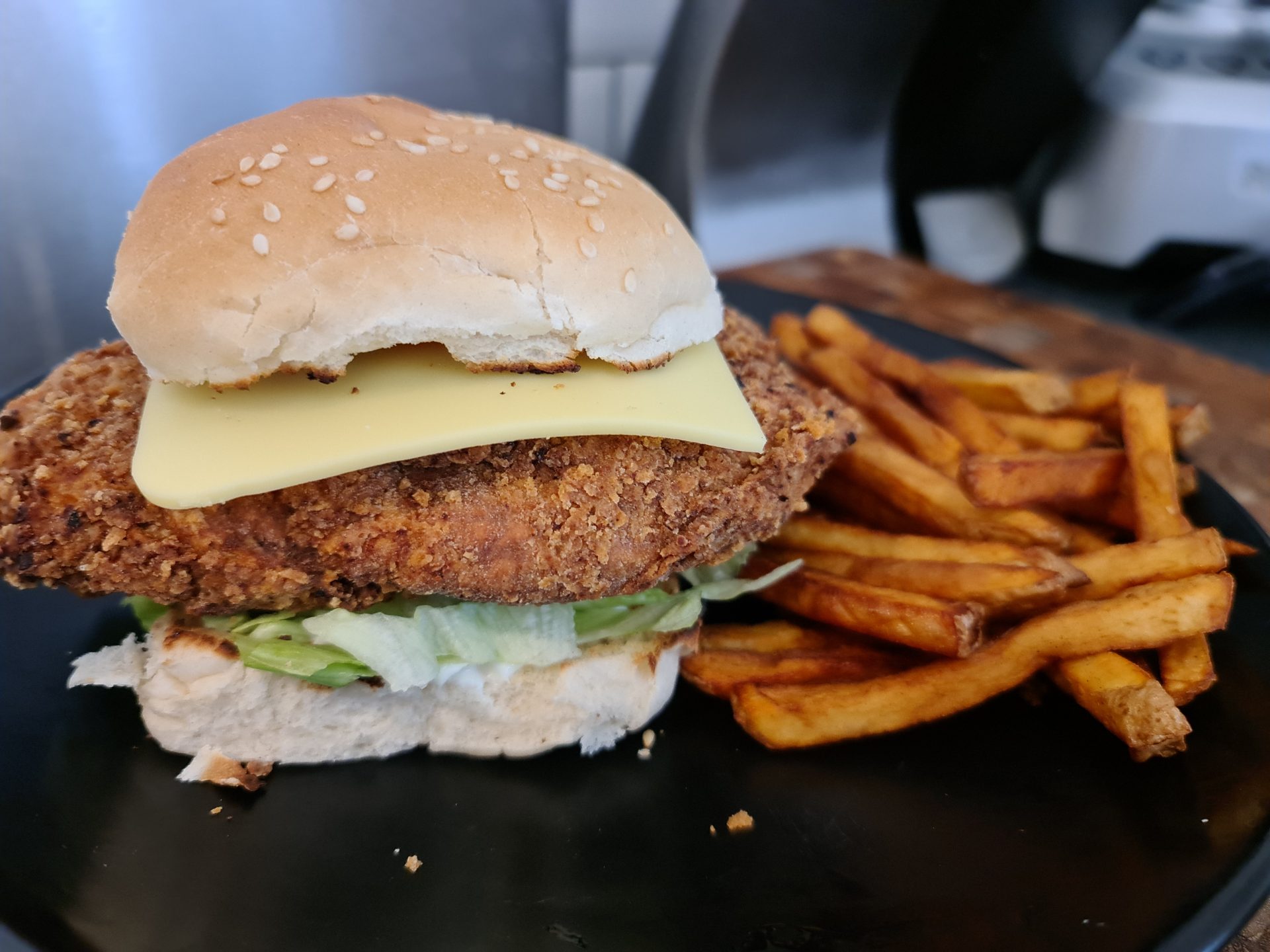 I am a massive fan of Fried Chicken. It’s one of my favourite foods – chicken wings, fried chicken and waffles, chicken burgers… you name it, I love it. But I tend not to order from KFC because I worry about the ethicality of their chicken as I can’t see how you can mass produce so much chicken for relatively cheap. Also, for obvious reasons, it’s not remotely Vegan-Friendly and since I’m doing a month’s worth of Veganuary recipes a chicken burger won’t fly. Quite literally.

KFC *do* sell a vegan burger but it’s made of Quorn and I’m not the biggest Quorn fan. The texture can be a bit dense and the flavour is a bit bland sometimes unless you really season the motherloving carp out of it. So, I wanted to create a vegan alternative to the KFC Zinger burger using homemade Seitan (thats ‘sci-tan’, not Satan) which is spicy, flavoursome and a great texture and comes with a vegan mayo as well! It’s a lot of ingredients, but it’s totally worth it.

For the Seitan - in a food processor, blitz up the chickpeas until they're almost a paste and malleable.

Add in the nutritional yeast, spices, miso paste and sriracha and blitz that in with the chickpeas.

Tip into a bowl and add the vital wheat gluten and chickpea flour and start working together with your hands.

Gradually add in the vegetable stock - a bit at a time - until you get a smooth dough-like consistency.

Cut into 4 pieces and flatten out into a chicken breast shape - or whatever shape you fancy - and place into a pan of simmering water for 7 minutes.

Remove from the water and leave to drain and cool for 10 minutes.

For the marinade - in a large bowl, add the vegan yoghurt, soy milk, lemon juice and sriracha. Mix together and then place in the Seitan in and leave to marinade for at least 30 minutes.

For the coating - in another bowl, add the plain flour and spices, mix together and then coat the marinated Seitan in the mixture. To get an extra crispy burger, you can dip back into the marinade and then back into the dry coating again to double-coat.

In a deep fat fryer or a large pan, bring up around 2 litres of vegetable oil up 190°C/375°F. Place the Seitan into the oil carefully and fry until golden brown for 6 - 7 minutes. Drain on some kitchen towel.

For the vegan mayo, add in the aquafaba into a blender along with the sugar, mustard, garlic cloves, white wine vinegar and salt. Blitz up until all well combined. Then add in the rapeseed oil and blitz up until emulsified and thickened into a mayo. If it's too thing, add some more aquafaba and blitz again.

Serve the burger in a bun with the mayo, iceberg lettuce, some vegan cheese and a little sriracha along with a side of fries.