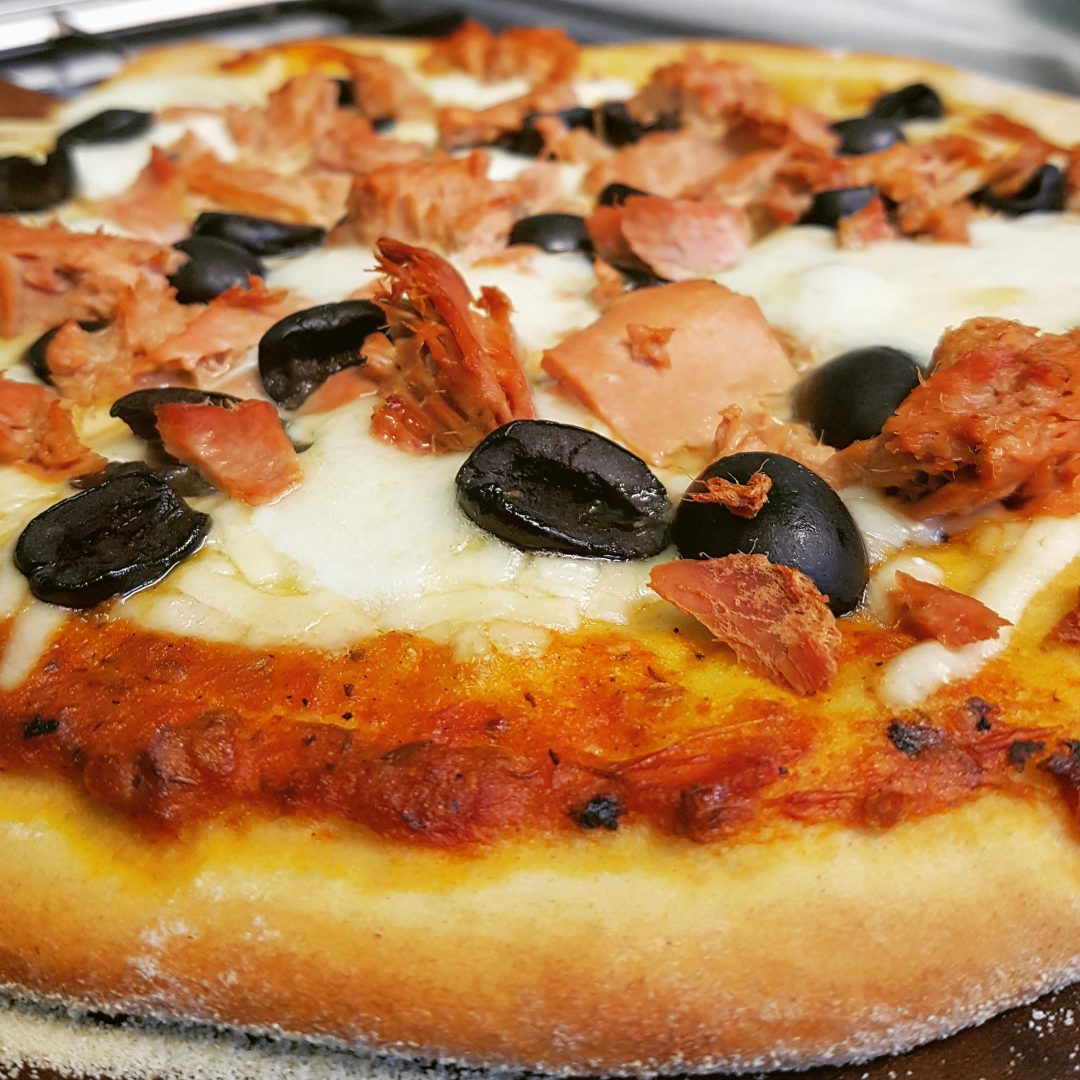 I have published a pizza recipe previously on the site, but my motto is “you can never have too many pizza recipes”. Well, I don’t actually have a motto. But that doesn’t make that statement any less true.

What makes this recipe stand out above other pizza recipes is the sauce. While my other pizza recipe was a BBQ sauce, this goes a little bit more traditional with a tomato sauce. But it’s not using tinned tomatoes as a base, but fresh, whole tomatoes, roasted in the oven with onion and garlic. It makes for a fantastically flavoursome pizza, and couple it with a homemade dough it’ll be a hit with anyone you choose to serve it to… assuming you don’t polish it off yourself.

I used Tuna and Black Olives on this pizza, but you can put whatever you like on it – or simply have it with the sauce and lashings of cheese. It’s up to you!

Add the flour into a mixing bowl, or stand mixer, and put the yeast on one side of the bowl, and the salt on the other. Next add the olive oil, and then slowly add the water and begin mixing the dough until it all comes together into a dough. You don't want it too wet or too dry.

If you're kneading by hand, remove from the bowl and place onto a lightly oiled surface and knead for 10 minutes until the dough becomes soft and smooth. If you're using a stand mixer, then leave it to knead on a medium-slow speed for 5 - 10 minutes.

Place the dough into a lightly oiled bowl and cover with cling film and leave to prove preferably for 8 hours, but if you're strapped for time an hour will be okay.

While the dough rises, chop the tomatoes in half, roughly chop the two onions, and peel the garlic cloves. Then place them all into a roasting tin along with the sun dried tomatoes, salt, pepper and olive oil. Give the tray a shake so everything is covered in oil, and then place in the oven on the top shelf and roast for 45 minutes. Halfway through, give everything a shake and turn so nothing gets completely burnt, though a bit of charring is good!

Remove the tray from the oven and turn the veg into a large bowl, add in the basil and oregano and, using a hand blender, blitz the roasted veg until it turns into a smooth a sauce as possible. If you don't have a hand blender, you could use a potato masher and a bit of elbow grease.

Once your dough has finished proving, remove from the bowl and knock all of the air out. If you're making one large 12" pizza, then you don't need to do anything, but if you're making two smaller 7" pizzas, then divide it into two equal pieces.

Add a light dusting of semolina to a work surface and place the pizza dough onto the surface. Using a rolling pin, roll your dough out to your desired size and thickness. It's really up to you how you want your base, if you want a crust then leave the dough slightly thicker all away around the edge. If you want an italian-style base, then roll it out into a thin, equal base.

Place the pizza base(s) onto a baking stone or a large baking sheet, coated lightly with semolina.

Once your dough is rolled out to your desired size and shape, spread a thin, layer of the sauce over the base, leaving as much edge as you desire for the crust. A little goes a long way with this sauce, so don't coat it too thick otherwise you'll end up with a soggy base. If you have any sauce left over, you can freeze it and use it for pasta or meatballs!

Add the grated cheese over the pizza base so it's nice and even. Then take the buffalo mozzarella and wrap it in kitchen towel and squeeze out as much of the water as you can. Then tear it into a pieces and place over the pizza.

Drain the tuna well and chop the olives in half and distribute over the pizza.

Bake the pizza in the oven on the top shelf for 12 - 15 minutes or until the pizza base is lovely and golden and your toppings are cooked. Remove from the oven, leave to cool for a couple of minutes, and enjoy!