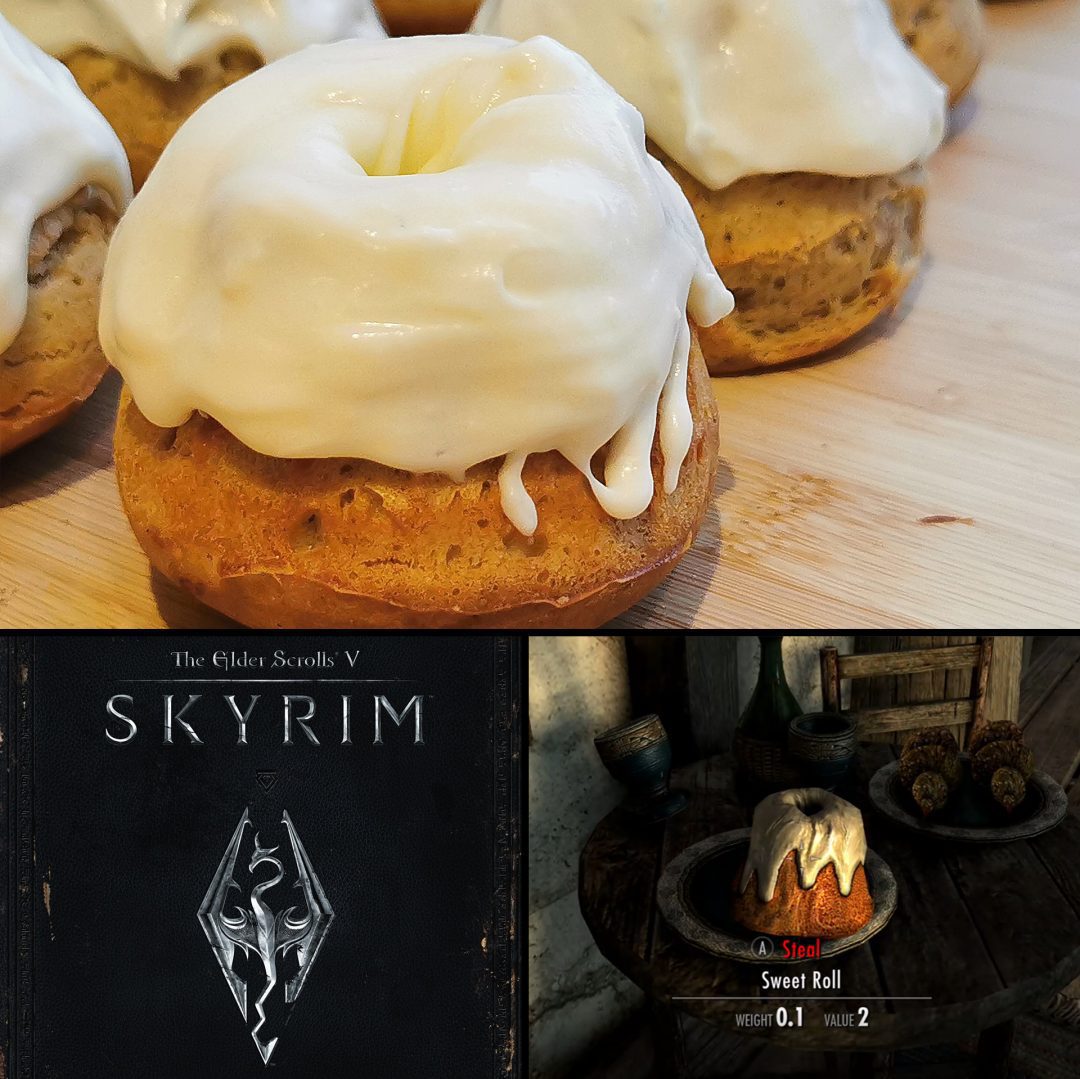 I know why you’re here. Let me guess? Someone stole your sweetroll?

Well, if that’s the case, then worry no more about the sweetroll thief, because with this recipe you’ll be able to create your own version of the iconic baked goods from the massive 2011 hit, “Skyrim”.

If you’ve been living under the proverbial video game rock for the last 8 years then Skyrim is an open-world RPG where you play as a hero known as the “Dragonborn”, out to stop the land of Skyrim being destroyed by, well, dragons. But deeper than the overarching story of Skyrim, there’s a rich lore within the game, right down to unique recipes that you can find in the game. Including the aforementioned “Sweetrolls”!

These are a soft, bready roll that is covered in a sweet, cream cheese icing. They’re sweet and super filling, perfect for putting you in the right frame of mind to battle dragons!

I actually took the base for this recipe from the cookbook “The Elder Scrolls: The Official Cookbook” by Chelsea Monroe-Cassell, but made a few tweaks and additions along the way to fit in with my vision of a sweetroll. So this is my take, but you might have a different way! These are a fictional food, after all, so if you want to play around with the recipe, then do!

Mix together the warm milk and melted butter in a large bowl together, then add in the honey and stir until the honey is dissolved.

Add in the salt to one side of the bowl, and the yeast on the other side and stir into the milk.

Add the egg, flour and cinnamon, ginger, nutmeg and mixed spice and mix together until you get a smooth, thick batter. It should be almost like a loose dough.

Next you'll need 3-inch, miniature bundt moulds. Spray the moulds with a little oil first, then add in the batter to the moulds. Smooth down the dough with a little water dabbed on the end of your fingers, then leave to rise for 30 minutes.

While the sweetrolls rise, you can make the icing - add together butter, cream cheese and icing sugar into a bowl and beat together until smooth and creamy. Add a little double cream until the icing barely falls off the spoon.

After the sweetrolls have risen a little, pop into the oven and bake for 15 minutes.

Remove from the oven and leave to cool in the mould for 5 minutes.

Turn the rolls out of the moulds and place back onto a baking tray, and bake in the oven for a further 3 minutes just to brown the tops a little.

Place onto a cooling rack and leave to cool completely.

Cover the tops of the sweetrolls with the icing, letting some drizzle down the sides, and then enjoy like the DOVAHKIIN that you are!