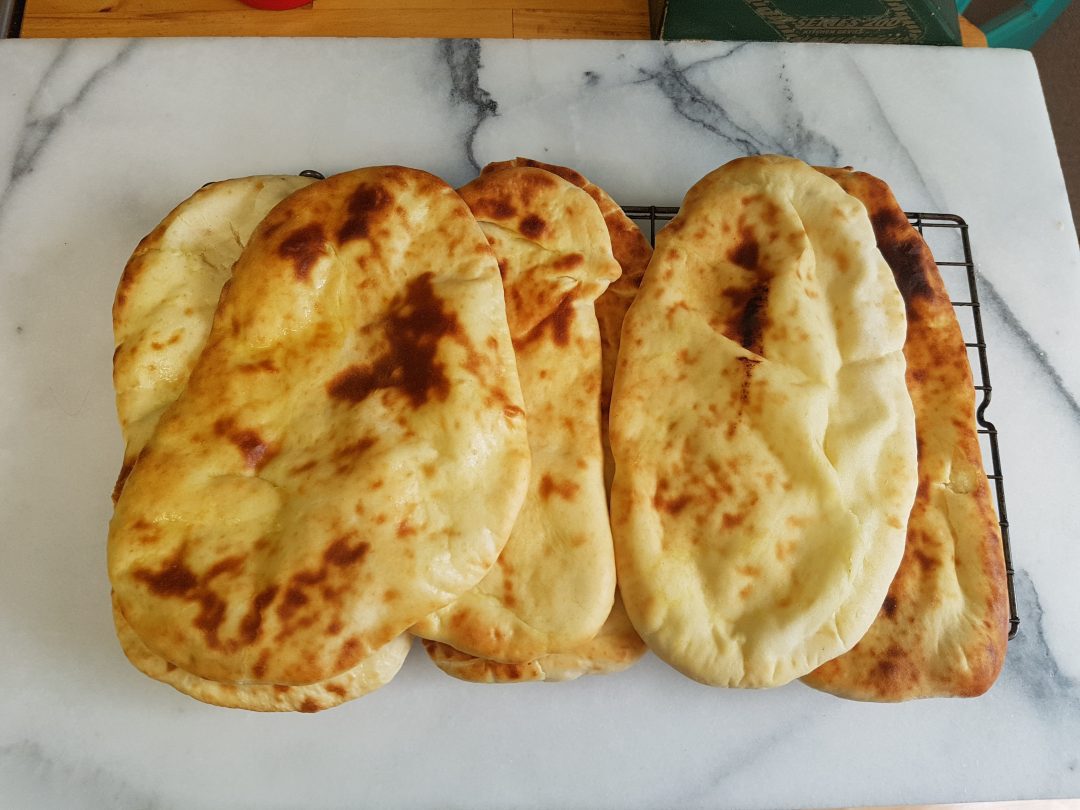 We love our Indian food here in Britain. Obviously an influx of Indian cuisine made it’s way over here when India was part of the long defunct British empire, and thus there curry houses everywhere, and even a curry invented in Britain – Chicken Tikka Masala. But it’s not just the curry dishes that we’ve embraced. If you’ve ever ordered a curry from a restaurant or a takeaway, you’ve undoubtedly had a Naan bread at some point. Where it’s plain, peshwari, garlic or keema, you’ve likely had one at some point in your life, likely to take the heat away from the spicy food you’ve been eating!

Traditionally made in a Tandoor, which is a cylindrical oven made of either clay or metal, it is more than possible to make these breads at home using your home oven and grill These are best made using a baking stone, like I have, but you can do this with a normal baking sheet as well. Next time you make a curry at home, give these a try as well. You’ll be surprised at how well they’ll turn out!

Warm the milk - 30 seconds in the microwave will do, beat the egg - and whip the yoghurt briefly so it's a bit creamier.

Add all of the wet ingredients into the dry ingredients, and then bring it all together using a wooden spoon for a minute or two.

Once most of the mixture is combined, lightly oil a surface and tip everything onto this surface and finish bringing the mixture together until it starts to become a soft dough.

Knead the dough on the oiled surface for around 5 minutes until it becomes a soft, silky dough. It shouldn't be sticky and should leave the surface clean.

Lightly oil a bowl, place in the dough, cover with clingfilm and leave to prove in a warm place for 1 hour or until it's doubled in size.

Before you get to work on the next stage, turn your oven onto it's highest setting and place your baking stone or baking sheet in the oven on a high shelf for 20 minutes so it gets really, really hot. BE CAREFUL. When I say hot, I mean REALLY hot. While you're at it, put the grill on a medium-low setting.

Once your dough has proved, take it out of the bowl and knock the air out, then cut it into six equal pieces.

Take one of your pieces of dough and place it on a lightly floured surface, and roll it into a traditional Naan shape.

Take the rolled out Naan, and CAREFULLY place it flat onto the hot stone or tray while it's still in the oven. You can pull the shelf out a bit from the oven to make it easier and you can lightly oil your hands so it doesn't stick to your hand.

Cook the Naan in the oven for 3 - 4 minutes maximum. The Naan will rise slightly from the very hot temperature. While it's cooking, roll out another Naan.

After the 3-4 minutes is up, take the Naan out of the oven carefully, and then place it under the grill for a maximum of 30 seconds so it puffs up and get lightly browned on top. Keep a close eye on it and don't leave it alone. It won't need very long.

Place it onto a wire rack, and then repeat the process for the rest of the Naan.

Once all your Naan have been cooked, take a little melted butter, ghee or oil and brush the Naan lightly.

Serve with your favourite curry and enjoy!