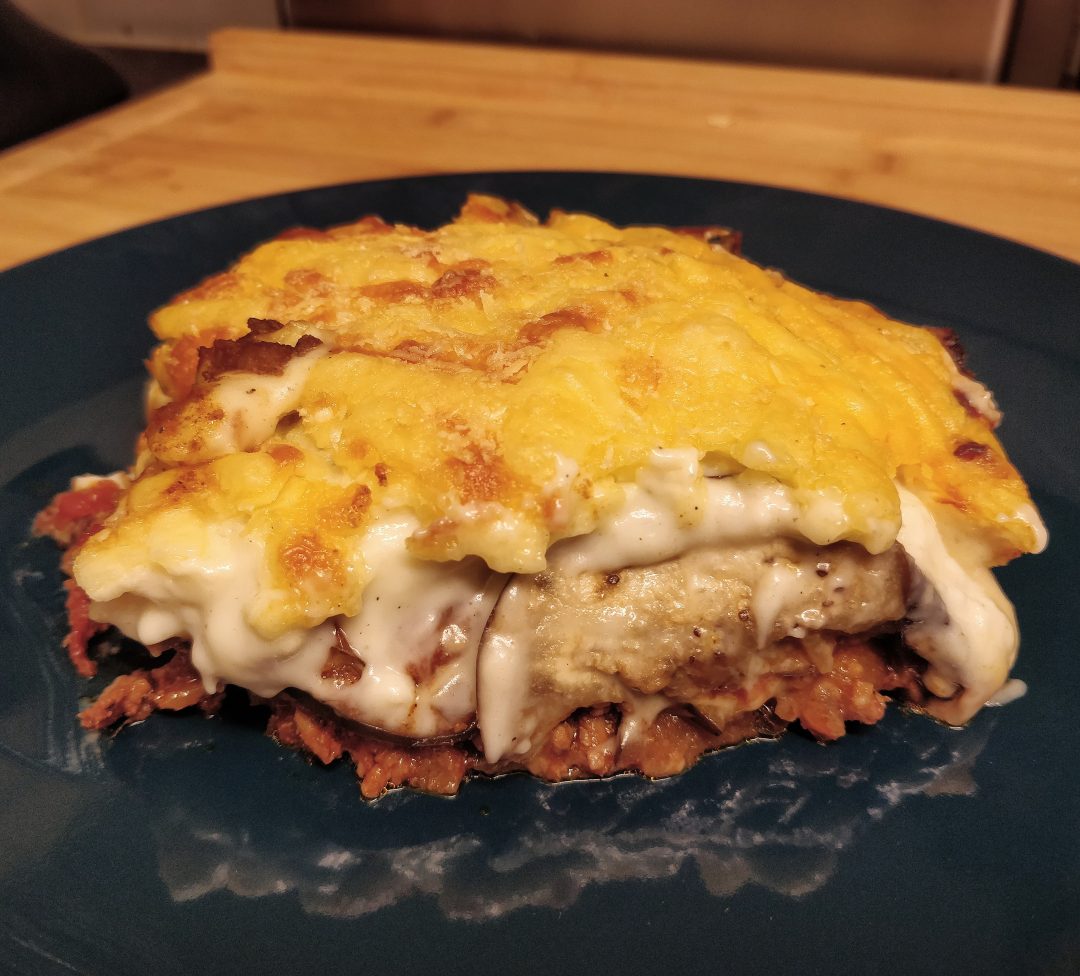 Moussaka confused me when I was a kid. I thought it was basically lasagne but with Aubergine instead of using sheets of pasta. But as I got older and wiser… well, older… Iwh of course learned that while there are similarities, the origins and flavour profiles are completely different. While they both used ground meat, Moussaka uses lamb as opposed to beef and, because of it’s Middle Eastern origins, it uses a lot of spices such as cumin, coriander and cinnamon. This combination of lamb and spices makes for rich and flavoursome dish which was a big family favourite when I was living at home, and this is my own take on a recipe which varies ever so slightly depending on which part of the Middle East you’re from.

Place a large pan over a medium-low heat and add the olive oil to heat up.

Add the onion, garlic and ginger to the oil and leave to slowly cook for 5 - 6 minutes to allow the onions to sweat and become translucent.

Move the onion mixture to one side of the pan, turn the heat up to medium high, and add in the lamb mince cook it for until it's browned all over.

Once the lamb is browned, combine it into the onions and salt, pepper, ground coriander, ground cumin, and ground cinnamon and mix those spices so they coat the lamb all over.

Add the tin of chopped tomatoes, throw in the stock pot (don't add any additional liquid) and then stir it into the lamb. Turn the heat down to medium and leave to simmer and bubble away for 10 minutes, stirring occasionally.

While the filling bubbles away, slice the aubergines into 1cm slices.

Take the filling off the heat and take a large, shallow ovenproof dish.

Use half of the filling and create a layer in the bottom of the ovenproof fish.

Now take half the slices of aubergine and create a layer, overlapping the slices slightly, on top of the lamb.

Take a medium-sized saucepan and over a medium-low heat add in the butter to the pan and let it melt completely.

Now add in the flour to the butter and stir it in. Cook the flour over the heat for a few minutes to cook out the raw flour taste, stirring constantly.

Once the flour has cooked out, add in the milk in slowly, a little at a time, stirring all the time until all the milk has been added.

Add in the salt, pepper and grated nutmeg and allow to cook for a further 3 - 4 minutes to allow the sauce to thicken.

Pour the bechamel sauce over the top of the aubergines and lamb and make sure it's an even, thick layer.

Add the grated cheddar and grated parmesan over the sauce.

Place in the oven and bake for 45 minutes. Remove from the oven, leave to cool for 5 minutes and then serve on it's own or with a light salad.