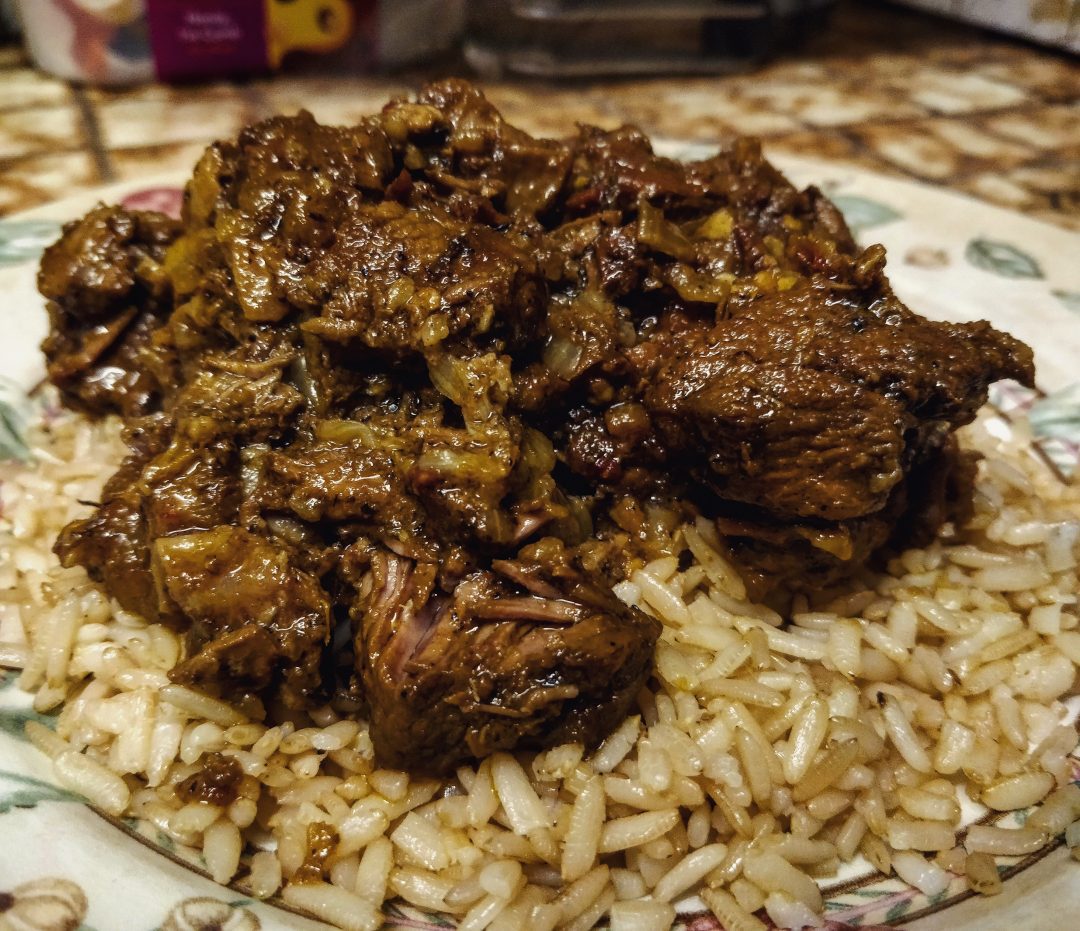 Before the foodie police come after me, let me start off by saying that while you see Vindaloo – the curry, not the godawful wretched football song released in 1998 – on pretty much every Indian menu in the country, it’s not actually Indian in origin. The Vindaloo was a dish made by the Portuguese settlers in Goa and was called Carne de Vinha d’alhos (which is literally translated as “meat in garlic wine marinade”) and was traditionally made with Pork. But the local Goan cooks took the dish and adapted it to Indian flavours and ingredients – namely the red wine being subsituted for vinegar, which is the basis of the dish today – which is one of the most popular in Indian curry houses throughout the UK.

While lot of people feel that it’s known for being an extremely hot dish, I find that it’s a dish that is known for an intensity of spice and flavour rather than being searingly hot. That’s why I have tried to create a recipe which, while giving a nice amount of heat, is full of flavour and makes for melt-in-the-mouth tender lamb. While there’s a long ingredients list and a long slow cooking time, I’m extremely pleased with this dish and it’s well worth the wait.

Take a dry (no oil) frying pan and place over a high heat, and toast the cinnamon stick, bay leaves, cumin seeds, black mustard seeds, fennel seeds, black peppercorns and the seeds from the cardamon pods until you get a lovely toasted smell and the seeds start to pop a little.

Remove from the toasted spices from the heat and grind into a fine powder using a spice grinder or, if you don't own a spice grinder, you can start them off in a food processor and finish with a pestle and mortar.

Place all of the spices - including the chilli powder, coriander, garam masala, and tumeric - into a food processor along with the chillies, garlic cloves, ginger, cider vinegar, vegetable oil, and the water. Blitz everything up until it becomes a nice and smooth paste.

Cut the lamb steaks into about 2" (5cm) chunks and place into a large bowl. Pour over the vindaloo paste and stir into the meat making sure everything is coated. Cover the bowl with cling film and place into the fridge to marinate for at least 3 hours, but preferably overnight.

Once the meat is marinated, take large lidded saucepan or frying pan and place over a medium high heat with the vegetable oil.

Chop the onions into a fairly fine fine dice and place into the oil and cook in the oil for 10 - 15 minutes until the onions soften and start to brown.

Next, add the marinated lamb into the pan and cook it with the onions until the meat is browned all over.

Pour the water over the lamb, stir in, and the bring up to a simmer. Place on the lid, bring down the heat to low, and leave to simmer away for about 4 hours, making sure to stir frequently so the spices don't burn on the bottom of the pan. Remove the lid for the last 15 - 20 minutes to let the sauce reduce and thicken. The sauce should look lovely and dark and the meat should be very tender. If you'd prefer more sauce, then you can add more water if you like.

Serve with rice and/or naan bread and, optionally, a dollop of yoghurt.