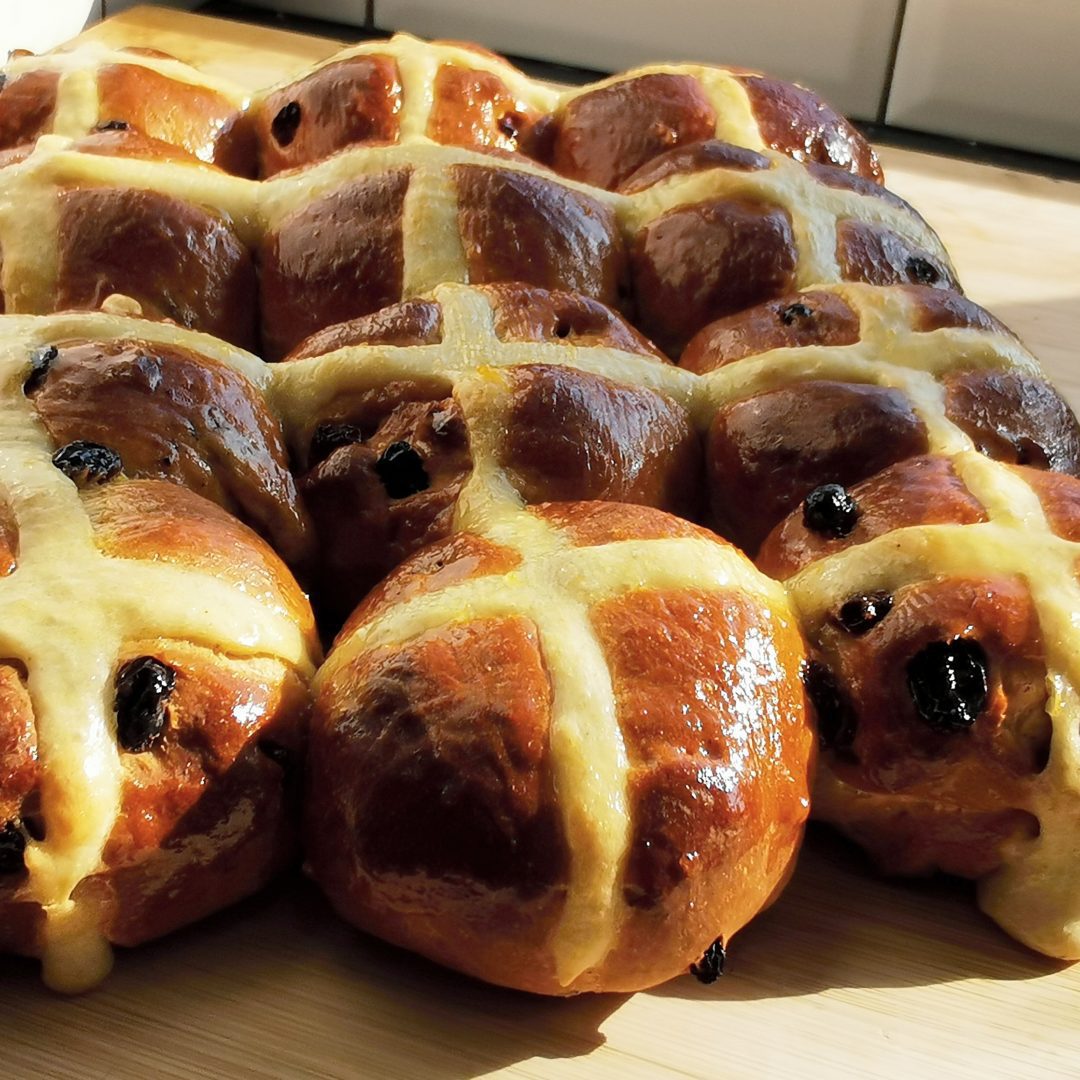 Easter means different things to different people. For many it’s about the birth and resurrection of Jesus, who allegedly died for our sins. For many others it’s about gathering with family, a reason to over-indulge in chocolate, an extra couple of days off work or, if you’re like me, it’s all about the traditional foods. Especially, Hot Cross Buns!

Hot Cross Buns are something that I’ve grown to love more and more as I’ve gotten older. I don’t know why, but whereas before I could take them or leave them, now they’re something I look forward to at Easter. However, the ones you can get from the store can be a little hit and miss, so I love making my own as it’s extremely satisfying and you can tailor the flavours to suit you. Not a fan of mixed peel? Leave it out like I have here. Love cinammon? Add more! Want to use chocolate chips rather than sultanas? Do! You are the master of your own destiny. And buns. In this recipe, I’ve boosted the cinnamon flavour with some mixed spice and also some cloves!

Slowly bring the milk to the boil on a low heat, and melt in the butter. Leave to cool until it becomes room temperature.

Add the flour to a bowl, next add the yeast and salt to opposite sides to the bowl, and then add the sugar and spices.

Add the milk and butter mixture and the egg, then either bring it together into a sticky dough with a wooden spoon or with a stand mixer on a medium-low speed.

If you're using a stand mixer then leave the dough to knead for 5 to 10 minutes or, if you're using your hands, tip onto a floured surface and knead for the same amount of time until the dough is smooth and elastic.

Place the dough in a lightly oiled bowl, cover with cling film and leave to rise in a warm room for 1 hour or until doubled in size.

After an hour, take the dough out and flatten out the dough into a square and spread the orange zest and sultanas over half the dough, then fold the dough and knead the dough until the sultanas and zest are evenly distributed throughout the dough.

Leave the dough to rise again in the bowl covered by some lightly-oiled cling film until for one hour or doubled in size.

Divide the dough into 12 equal pieces, approximately 95g per piece, and roll into a smooth balls Arrange on a baking tray so they're close but not touching with room to expand. Lightly cover with a clean tea towel and leave to rise again for one lasts hour.

Mix the plain flour with the water to make a thick paste. Spoon into a piping bag and pipe over each row of buns, and then across the buns to form the cross. Bake in the oven for 20 minutes until they're golden brown.

Remove the buns from the oven. Mix the jam with the water, stir thoroughly until all lumps are gone, and then brush over the buns to glaze and leave to cool.