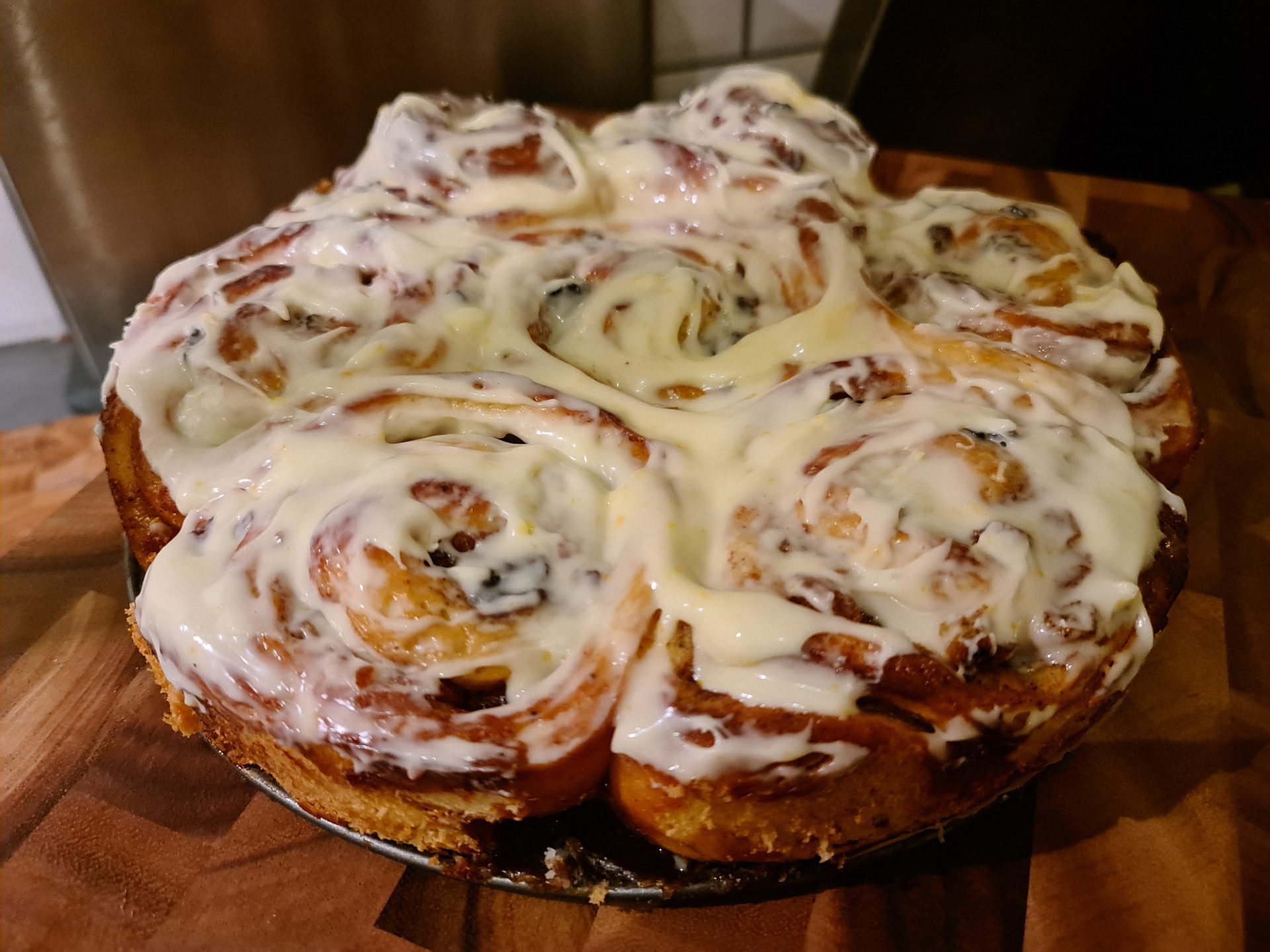 I’m very fond of a mince pie – I get that from my Dad – but sometimes I like to change things up. Every year I get a jar of my Mum’s homemade mincemeat, so this year instead of making mince pies I thought I would change things up and incorporate it into some Cinnamon Rolls!

It made sense to me because Cinnamon Rolls are already kind of Christmassy – cinnamon is everywhere at Christmas, so by adding cloves, nutmeg, clementines and mincemeat, we can make them extra Christmassy! It really works too. So if you fancy changing this up this Christmas or want an alternative to a Christmas classic, then give these a go!

Add the flour, sugar and yeast to a mixing bowl, and make a well in the centre.

Crack one of the eggs into the well, add the clementine zest, milk, the softened butter, and the vanilla essence.

Mix together the ingredients with a wooden spoon, or get in there with your hands to form a soft dough. If you're using a stand mixer, switch it on to a medium-slow speed until the dough is formed.

Tip the dough onto a lightly floured surface and knead for about 10 minutes until it becomes smooth, or let the stand mixer knead the dough until you get the same effect.

Place the dough into a lightly oiled bowl, cover with clingfilm (or an unused shower cap works just as well!) and leave in a warm room for 2 hours until the dough is doubled in size.

Once the dough has proved, it's time to roll out the dough and make the filling! Roll out the dough into a rectangle on a lightly floured surface as thin as you possibly can with dimensions of approximately 40cm x 20cm.

Next, spread the softened butter all over the rolled out dough, coating every part of the surface. Then, in a bowl, mix together the caster sugar and cinnamon and then rub it into the butter. Get in there with your hands, you want to make sure you get as much of the filling in there as possible!

Do the same again, but with the mincemeat.

From the longest side, roll the dough up into a long cylinder as tightly as possible to get as many swirls in there as you can. Then cut it into 2cm slices, which should get you about 16 slices, but it may vary depending on how large you rolled out your dough.

Take a couple of deep baking dishes, preferably round, and grease them with some oil or butter. Then, place the rolls around the outside of the dish with one in the middle, making sure to leave some space between each of them.

Now cover these with clingfilm or a light tea towel and leave them to prove again in a warm place for around 45 minutes to 1 hour, until they double in size and are all touching. Preheat an oven to 180°c (160°c fan assisted)/350°F/Gas Mark 4.

Once the rolls are risen, beat the extra egg and brush it over the rolls and place on the middle shelf of the oven for about 20 minutes until golden brown.

While the rolls are in the oven, beat together the butter and cream cheese for the icing, then add in half of the icing sugar and combine well. Then add in the other half and combine that in. Lastly, mix in the juice and zest of the clementine.

When the rolls are out of the oven, leave to cool for ten mintues, remove from the tin, and then cover with the cream cheese icing.