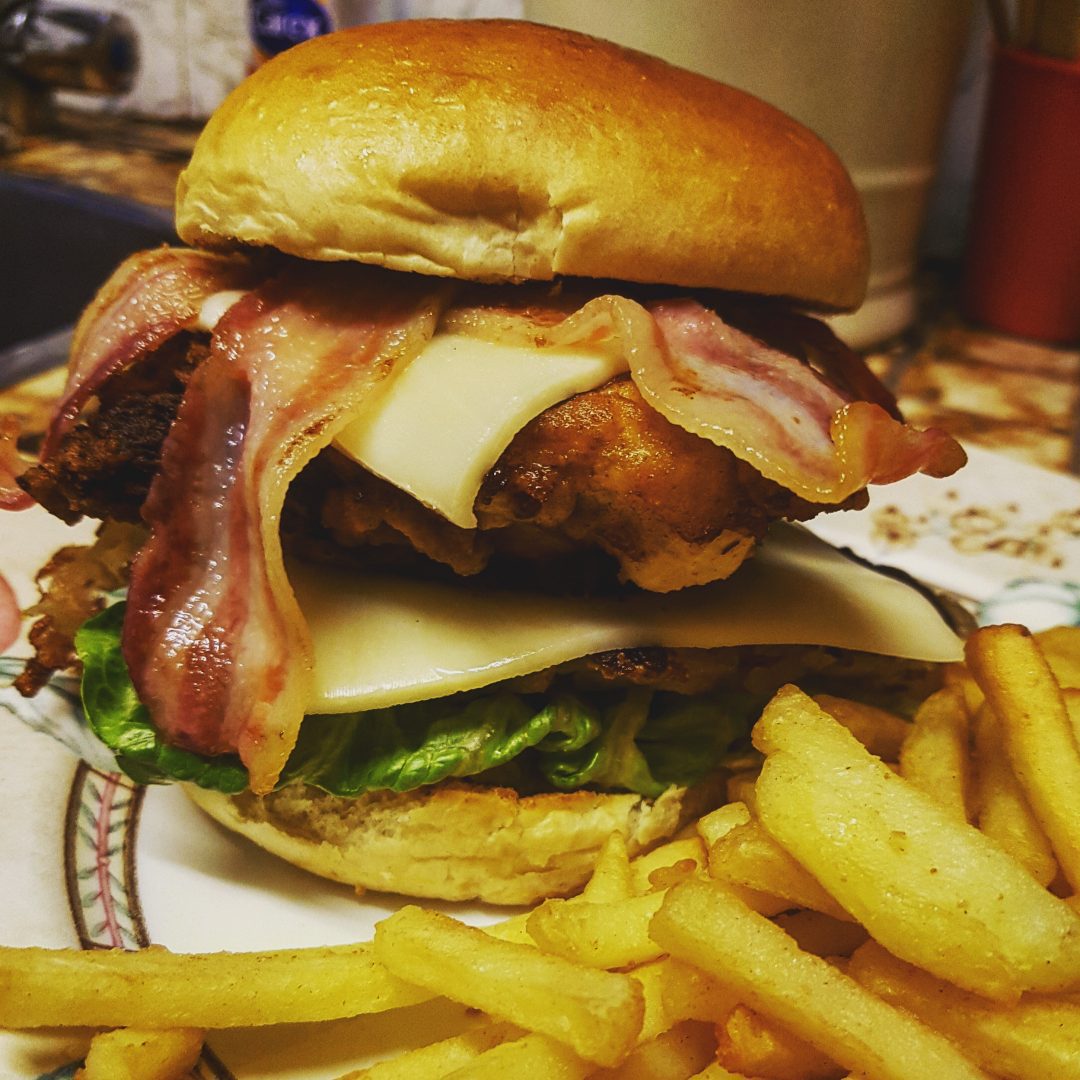 As much as I love great, homemade, food I’m also not adverse to a dirty takeaway every now and again and I must confess to having a particular weakness for KFC. It’s probably because one of my favourite foods in the entire world is fried chicken and if I order KFC then I will generally go for a bucket of chicken pieces.

However, I was in Camden the other day for a wrestling event – that’s Progress Wrestling, an amazing Independent Wrestling company – and needed to grab something quick to eat at the interval, so I popped in to the local KFC for a bite to eat and I ordered the Fillet Tower Burger (because wings aren’t very easy to eat standing in the street) and it was actually very good and I thought to myself “this would be a great burger to recreate at home” – which leads us to this recipe!

If you’re not familiar with the KFC Fillet tower burger, then it’s a chicken breast fillet, which has been deep fried, with a hash brown and a slice of cheese but instead of the stodgy hash browns you get, we’ll be making our own which will be thinner and crispier and adding some streaky bacon to the burger as well because… well… bacon.

In a large bowl, pour in the buttermilk and add in half of the spices and mix well.

For the hash brown, finely chop your onion and in a little oil cook them for 15 minutes over a low heat until they've softened and translucent and leave to cool.

Grate the potato - with the skin on - using a coarse grater and transfer into a dry, clean tea towel and squeeze out as much of the liquid that you can and then mix together with the onion and a little salt and pepper.

If you have something like a crumpet ring, then you an use this to help shape your hash browns. But if you don't, then shape the potato/onion mixture into a rough circle and fry in about 50ml oil for about 5 minutes each side until golden and crispy.

Once the chicken has marinaded in the buttermilk for at least a couple of hours, remove from the fridge and add the other half of the spices into the flour and mix together. Now remove the chicken breasts from the marinade and thoroughly coat in the seasoned flour and leave to rest for 5 minutes just to allow the coating to dry for 5 to 10 minutes.

In a deep frying pan, wok or saucepan, add 250ml of oil and bring up to a temperature of 170°C (325°F), and add the chicken breasts into the oil and cook for 6 minutes on one side, and then turn it over and cook it on the other side for another 6 minutes. The coating should end up golden and very crispy, while the chicken should stay moist and succulent while being perfectly cooked. If you're unsure, then take a temperature probe and the internal temperature of your chicken should be at least 75°C (170°F). Leave to rest for 5 minutes.

While your chicken is cooking, place the bacon onto a baking tray and cook in the oven on a high heat until it's wonderful and crispy.

Slice your burger buns in half, toast in a dry pan on a low heat (or under a grill) until nicely toasted, then construct your burger by adding the cheese slices, lettuce, tomato and your favourite sauces.

Serve with crispy fries, and enjoy!