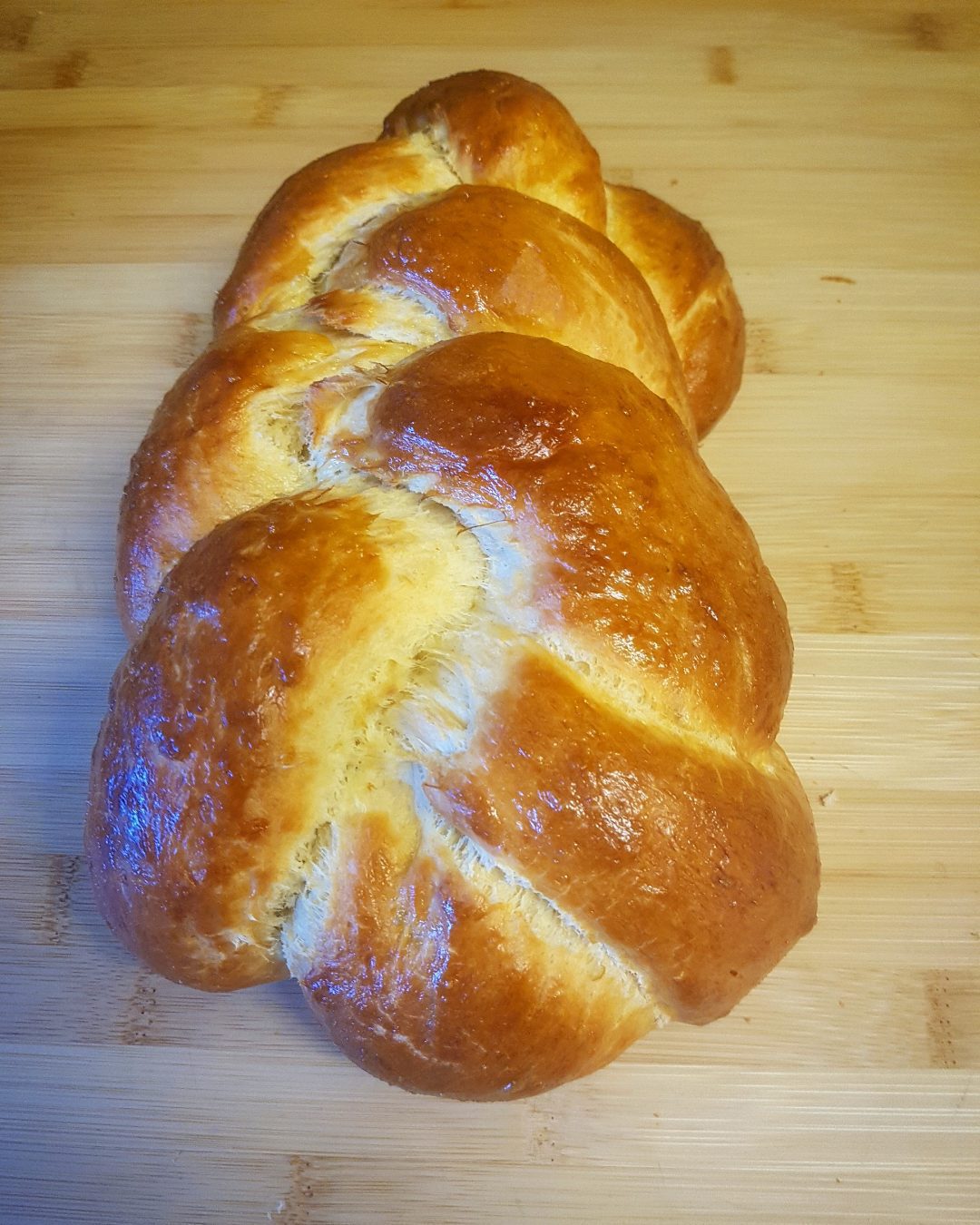 Brioche is a wonderful enriched bread of French origin – made with eggs, butter and sugar to give a wonderfully rich and light and fluffy texture – which has become an extremely popular loaf to use not just for eating by itself, but many eating establishments now prefer to use Brioche buns for their burgers or Brioche rolls for their Hot Dogs. It can also be used as an ingredients in many other traditional bread-based dishes, and makes for an amazing Bread and Butter Pudding or a fantastic French Toast.

The most classic version of the Brioche loaf is Brioche à tête – which is made with a large ball of dough as the bottom part of a loaf and with a smaller ball of dough to be placed on top of that to form the head (tête in French) – but I personally prefer making a brioche loaf with either a traditional plait as shown in the main image, or as a tear-and-share style loaf as seen below:

However, this recipe is extremely versatile and you could use it to make Brioche Buns or Brioche Rolls if you wanted. It’s entirely up to you. Whatever you do with this recipe, you’ll be in for a treat no matter what you make.

While you can make this recipe by hand, I would highly recommend using a stand mixer because working in the butter by hand is a lengthy and extremely messy process. It’ll also take a bit of time because, as the dough is so rich with butter, it’ll need to be proved in the fridge for several hours but it’s entirely worth the wait.

Add the flour to a stand mixer with a dough hook and then add the yeast to one side of the bowl and the salt and sugar to the other side.

Whisk the eggs up in a separate bowl and then add these and the milk into the mixer.

Start the stand mixer off on a slow speed for a couple of minutes, then turn up to a medium speed for another 8 minutes. The dough should be glossy and elastic.

Now, cut the softened butter into several small pieces and continue to mix on the medium speed while slowly adding them, one at time, to the dough and let it mix for another 5 minutes, but be sure to scrape the bowl down every so often. Make sure the butter is completely combined. The dough will be very soft.

Tip the dough into another bowl, cover with cling film and leave to prove in the fridge for at least five hours so that the dough rises and firms up so it's easier to handle.

Once your dough has proved and firmed up, remove it from the fridge and divide it into three equal pieces.

Make these three pieces of all equal length - around 40cm long - pinch them together at one end and then braid them as shown in the diagram below:

One you reach the other end of the dough, pinch this end together too and then fold both ends underneath the loaf to make it nice and tidy.

Place the loaf onto a baking tray, cover gently with a tea towel and leave to prove for another 1 - 2 hours or until doubled in size.

After your loaf has doubled in size, beat the remaining egg and gently brush it over the loaf, throughly coating every part.

Place into the oven and bake for 25 - 30 minutes or until the loaf is lovely and golden. Don't overbake as the egg wash will make the loaf too dark.